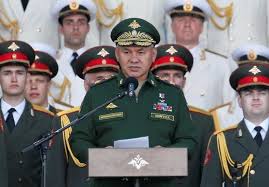 Russia has suspended its airstrikes on Aleppo from Tuesday morning until further notice but its Defense Minister Sergei Shoigu warned that rebel groups in the eastern part of the city should stop military action and leave, hoping that countries that have influence over the groups will persuade them to comply.

The reasons behind Moscow’s decision were not explained but Shoigu said that “everyone really interested in the fastest possible stabilization of the situation in the city of Aleppo should take genuine political steps and not continue shuffling political papers.” Moscow has been heavily criticized by Western countries for its actions in Syria.

Foreign Minister Sergei Lavrov said the suspension is “an act of goodwill in the hope that the pause will be employed to finally separate the armed groups supported and armed by the US, some EU members and countries of the region, from Jabhat al-Nusra (terrorist group outlawed in Russia) and other groups of this kind.” An expert meeting will begin in Geneva on Wednesday to differentiate ‘terrorists’ from the Syrian moderate opposition. A day before suspending its aistrikes, Russia announced a pause for the sake of humanitarian activities in the city and for the evacuation of the sick and injured.

Russia also signaled that it is monitoring the offensive against ISIS in Mosul and expressed concerns about the strategy being implemented. “The city is surrounded but not completely” by the Iraqi forces and their allies and “I don’t know why”, Lavrov quizzed as he opined that “the remaining corridor is fraught with the risk the Islamic State may move from Iraq’s Mosul to Syria.” He stressed that Russia will be willing to take “both political and military decisions” if such a scenario arises.

Russian forces have been engaged in Syria for more than a year and they have contributed immensely to the recovery of territories that were lost by the Pro-Assad forces.