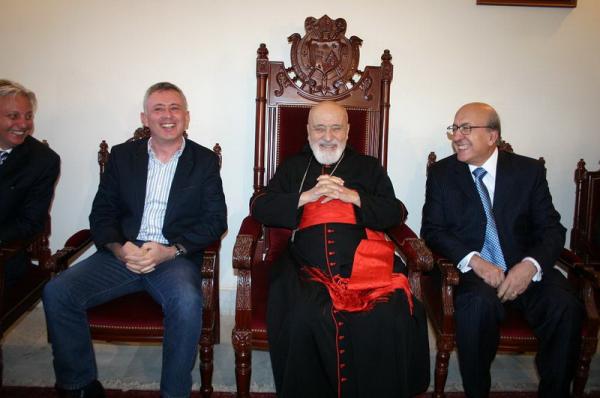 After he slammed the package deal proposed by Speaker Nabih Berri as unacceptable to any presidential candidate who “has dignity”, Maronite Patriarch Beshara al-Rahi lamented, in his Sunday sermon, that the “two years and five months of destructive presidential void” is enough.

The Patriarch called on political and parliamentary blocs “to clearly and frankly declare their stances on the candidates whose nominations have become public.”

Michel Aoun and Suleiman Franjieh are leading the race for the presidency but parliamentary boycotts and the subsequent lack of quorums hampered the voting from taking place.

Patriach Rahi said “it is time that political forces head to Parliament to elect a President abiding by the Constitution and the democratic parliamentary system.” He stressed that issues discussed at the national dialogue or in bilateral meetings between political parties “cannot become an obligatory gateway” or “imposed as preconditions” to elect the president because it would violate the constitution.

Most of the Lebanese political parties rally behind two coalitions that support either Aoun or Franjieh. Rahi is hoping that the deadlock will soon come to an end and that a “wise, shrewd and knowledgeable” president will be elected and “not a partisan or puppet president.”

According to the Lebanese constitution, the Parliament Speaker must be a Shia and the Prime Minister a Sunni while a Christian Maronite occupies the presidency.

Future bloc member, MP Ammar Houry, said progress has been made in reconciling the differences between political parties. He sounded upbeat as he said “the upcoming presidential session this month will be decisive” hoping that “all the politicians will put national interest above all considerations and give importance to the electoral law.”

Elsewhere, the leader of the Free Patriotic Movement, Foreign Affairs Minister Gebran Bassil said, on Sunday, that “all insinuations against our party regarding undercover agreements and settlements are actually intended for defacement and sabotage.” He claimed that “our agreements were conducted for the sake of restoring our role and position within the State.”

The presidential vacuum has slowed down several decisions in the cabinet as Ministers query the legitimacy of the Prime Minister to take such decisions.