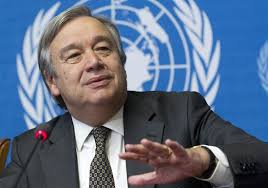 Morocco is crossing its fingers wishing that Former Portuguese Prime Minister António Guterres will become the UN’s next secretary General.

Guterres is set to become the next United Nations secretary-general, after he emerged as a clear favorite among the 15 Security Council members.

The Council members agreed to put his name forward to a formal vote. Afterwards, the decision will be formally submitted to the General Assembly for consideration.

Mr. Guterres, who served as the UN High Commissioner for Refugees from 2005 to 2015, and 12 other candidates were in the running to succeed the current UN Secretary General, Ban Ki-moon, who leaves office at the end of the year.

The secretary-general of the UN is appointed in a two-stage process. A candidate is first recommended by the Security Council, and must then be approved by the 193-member General Assembly.

Guterres, who was head of the UN’s refugee agency for 10 years until 2015, emerged as the Security Council’s runaway favorite after the latest in a series of straw polls on Wednesday.

For Morocco, the election of Guterres will breakaway with a period of tension with the UN marking the mandate of Ban Ki-moon, whose verbal blunders concerning the Sahara issue and his missteps stirred controversy and casted doubt on the neutrality of the UN on the Sahara issue.