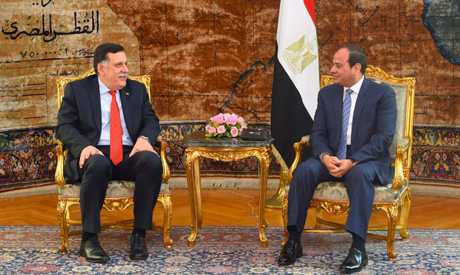 “Egypt will not let the oil ports be taken away from the Libyan people” and the deployment of Egyptian troops will send a message to “Western countries” forcing them to “think twice before intervening” in the war torn country, Ahmed al-Quesni said in an interview with Alwasat.

Quesni’s remarks hint that the Egyptian air force might have intervened in Libya after several reports talked of unidentified warplanes bombing troops battling renegade Field Marshall Khalifa Haftar who took over the control of the major oil ports in the country from the Petroleum Facilities Guard led by Jadhran this month.

Cairo is close to the Tobruk-based parliament supported by Haftar and its intervention in Libya is unlikely to be approved by the UN-backed Government of National Accord (GNA.)

The GNA has ruled out foreign intervention in the country although several western countries have some troops on the ground.

In another development, Prime minister-designate of the GNA, Fayez Serraj, said there is need for “a real reconciliation between Libyans inside and Libyans abroad.” He said, “There will be no exclusion of any political faction” despite the “many political divisions.”

For Serraj reconciliation of all Libyans including Tobruk-based House of Representatives, its allied government and armed faction led by marshal Khalifa Haftar will provide a ground for “political stability that will spur economic stability.”

Since establishing his team in Tripoli, late March, Serraj has been struggling to win nationwide support. Even in Tripoli, Serraj’s authority has been on a downward mode due to growing social discontent related to repeated and prolonged power cuts, kidnappings, lack of cash…

“As a Presidential Council we are open to all political factions … I have no reservations. Anything that helps solve the Libyan crisis and that can open bottlenecks is welcome; we are ready to meet anyone,” Serraj stated.

The GNA cabinet failed to get the vote of confidence of the Tobruk-based parliament as required by the Libyan Political Agreement.