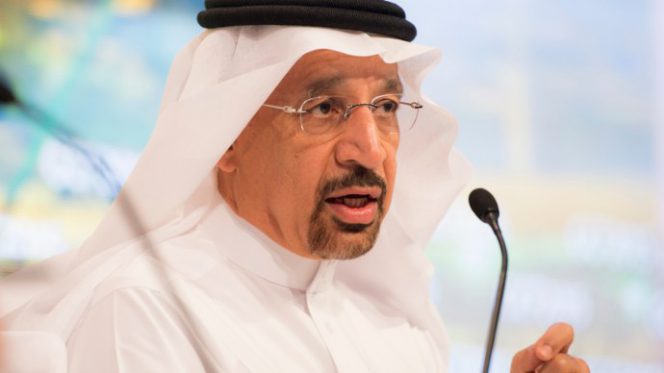 Saudi Arabia’s Energy Minister Khalid Al-Falih stated that the Kingdom exercises responsible oil policies as he acknowledged that “despite the surplus in global oil production and lower prices, the focus of attention remains on countries such as Saudi Arabia which, due to its strategic importance, will be expected to balance supply and demand once market conditions recover.”

The Minister made the statement at a meeting with officials of the US Energy Department.

His comments hinted that Riyadh could shift from its stance, since the fall of the oil prices began, that market will balance itself. Falih said his country is “seeking to maintain that balance (supply and balance under market conditions) while also giving heed to moderate prices for producers and consumers.”

The change of policy should not be expected anytime soon as Falih told the Houston Chronicle newspaper that “the question now is how fast you will work off the global inventory overhang” because the global oversupply “has disappeared.” He said the global inventory overhang “will remain to put a cap on the rate at which oil prices recover” and urged for patience because they have “to wait for the second half of the year and next year to see how that works out.”

OPEC member countries have failed to agree on cutting oil supply in order to boost prices and efforts spearheaded by Saudi Arabia, Qatar, Venezuela and Russia to convince Iran to freeze production output at January 11 levels also failed. Oil has risen to $50 a barrel, up 85% from a 12-year low reached in January as supply outages in Nigeria and Canada reduced the need to prop up prices.

In the annual bulletin released on Wednesday by OPEC, member states registered a significant combined deficit of $99.6 billion in 2015. In 2014, they had a surplus of $238.1 billion.