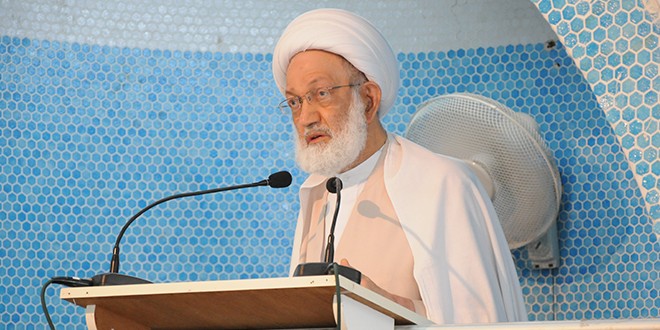 Hezbollah, the Lebanon-based politico-military group, and Iran have vehemently responded to Bahrain’s decision to strip Shiite Cleric Ayatollah Isa Qassim of his citizenship because he “serves foreign interests and promotes… sectarianism and violence.”

Hezbollah warned that the decision “pushes the Bahraini people to difficult choices, which will have terrible consequences for this corrupt dictatorial regime.”

Hezbollah claimed that stripping Qassim of his citizenship “sent a very wrongful message that there will be no reform, rights, dialogue or political approach.” It called on the Bahrainis to express their “anger and rage decisively.”

Bahrain has often claimed that Hezbollah and Iran interfere in its domestic affairs.

Commander of the Quds Force of the Islamic Revolution Guards Corps (IRGC,) Major General Qassem Soleimani, warned the Manama regime to stay away from the Bahraini Shiite cleric. He argued that trespassing him is “a redline whose crossing will set fire to Bahrain and the entire region and leave people with no other option, but armed resistance.”

Hezbollah said the move against Qassim is “very dangerous” considering his religious position and role as “a true guarantee for Bahrain’s present and future.”

The Shiite cleric’s citizenship was revoked by the cabinet, which claimed that he was abusing his position to “serve foreign interests and promote… sectarianism and violence.”

Although he is a strong advocate of “absolute allegiance to the clergy,” Qassim stayed in contact with “organizations and parties that are enemies of the kingdom,” the Interior Ministry stated.

Gulf States are increasingly using the measure against those who encourage protests against government policies especially demands for political reforms. Kuwait and the United Arab Emirates have made use of the measure this year.

Bahrain is ruled by the Sunni minority with strong support from Riyadh and since 2011, the Shia majority has been calling for structural political reforms.