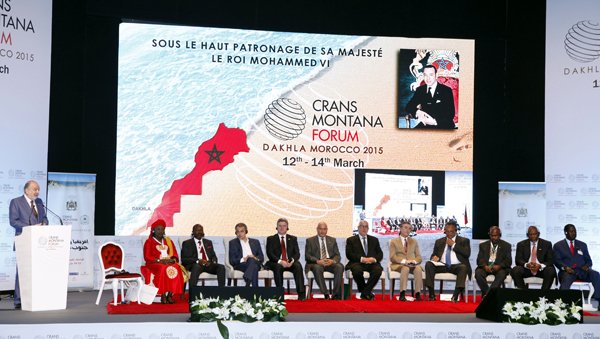 The prestigious Swiss NGO, Crans Montana Forum is holding its annual conference in the southern Moroccan City of Dakhla (17-22 March) for the 2nd year in a row, confirming Morocco’s determination to become a regional hub for South-South cooperation.

In a message addressed to participants at the 27th session of Crans Montana Forum, King Mohammed VI said South-South cooperation is “not an empty slogan” but it is “the result of a homogeneous strategic vision” designed to promote development policies and meet the needs of African populations.

“Morocco has made South-South cooperation one of the pillars of its Foreign policy and its international action”, said the Moroccan Sovereign in his message read out by chairman of the Council of the Dakhla-Oued Eddahab region Ynja Khattat.

The goal of this cooperation is to implement concrete programs in targeted areas to achieve measurable outcomes in terms of growth and the well-being of the populations of the countries of the South in the economic, social, cultural, environmental and religious domains, explained the Monarch.

The Crans Montana Forum convened in Dakhla is bringing together more than 800 foreign personalities, including many government officials from more than one hundred countries and representatives of international organizations.

King Mohammed VI praised the organizers decision to meet again in the Southern Moroccan city of Dakhla, saying such a gathering supports the Kingdom’s vision set out for the development of Moroccan Sahara which it is endeavoring to turn into a thriving economic hub with African countries.

The Sovereign availed this opportunity to shed light on the development model set for the southern provinces so that they can play their full role as a bridge between Europe, the Maghreb the Sahel region.

He also recalled the large-scale development projects launched in Moroccan Sahara in a bid to create jobs, competitive economic & industrial platforms in agriculture, fishing, ecotourism and other sectors.

These inclusive projects have been designed primarily to serve the interests of local inhabitants and enhance further their social and economic development within the frame of Morocco’s advanced regionalization which is taking shape slowly but surely.