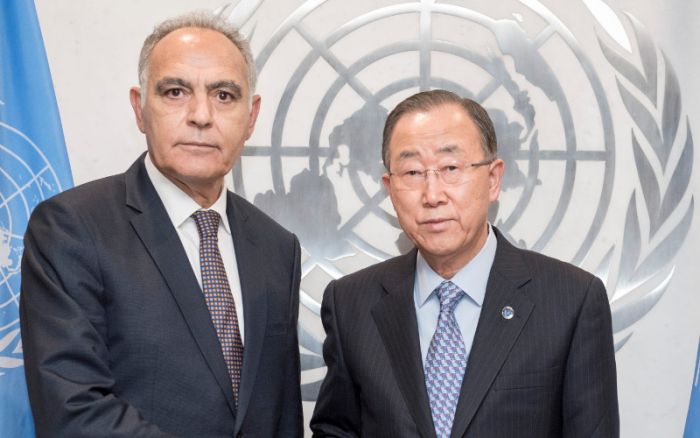 Morocco has raised the tone in responding to the United Nations Secretary General’s provocative remarks and behavior, decided a number of “immediate measures” and threatened to stop all cooperation with MINURSO, the UN mission supervising the cease-fire in the Sahara.

Morocco’s decisions were conveyed to the UN Chief Ban Ki-moon by Foreign Minister Salaheddine Mezouar at a meeting held Monday in New York.

Salaheddine Mezouar handed the UN head a letter “detailing the formal protests of the Moroccan Government about his unacceptable statements and unacceptable behavior during his recent visit to the region” and told him that all the components and forces of the Moroccan people decry and flatly reject his “inadmissible and reprehensible” remarks about the Moroccan Sahara issue, said the Foreign Ministry in a statement released Monday night.

Moroccan authorities believe that such actions are incompatible with the responsibilities and mission of a UN Secretary General, the statement said, adding that in view of “this dangerous drift,” Morocco decided to significantly reduce the MINURSO civilian component and, in particular, its political section. Morocco also decided to cancel the voluntary contribution it grants to ensure the MINURSO functioning.

The Foreign Department statement also announced that the North African country is considering the withdrawal of Moroccan troops engaged in peacekeeping operations.

Morocco reserves the legitimate right to resort to other measures that may be deemed necessary to defend its supreme interests, sovereignty and territorial integrity, the statement said.

The Foreign Minister insisted at his meeting with Ban Ki-moon that Moroccan authorities consider his acts as “incompatible with the responsibilities and mission of the Secretary General that compel him to a duty of objectivity and impartiality and to the respect of the framework established by the UN bodies,” the statement said. It added that Mezouar reminded the Secretary General that the term “occupation” he used to describe the presence of Morocco in its Sahara is a “legal absurdity and a serious political error,” and recalled that the resort to a referendum mentioned by Ban as a means to solve the Sahara regional dispute was discarded and cast-off by the Security Council, years ago.

“The use of such references is an insult to the Moroccan people who made great sacrifices to gradually regain its independence and defend its territorial integrity,” the statement said.

Mezouar reiterated at the Monday meeting, “the urgency for the Secretary General not to indulge in the undisclosed attempts seeking to undermine the Moroccan autonomy initiative which remains preeminent in the Security Council resolutions” and asked the UN Chief “to publicly clarify his positions to restore a climate of trust and mutual respect,” the Foreign Department statement said.