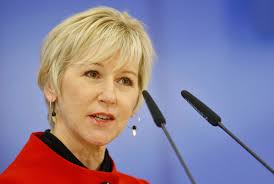 Swedish foreign minister Margot Wallstrom criticized Israel’s military actions against Palestinians and urged for the “vital” need to investigate the deaths in the recent outbreak of violence in the interest of accountability.

Her comments during a parliamentary debate triggered reactions from Tel Aviv with the foreign ministry stressing that such statements were “irresponsible and delusional” for they “support terrorism and encourage violence.”

The latest surge of violence which began since early October is characterized by daily knife stabbings, car ramming and shootings by Palestinians targeting Israeli civilians and soldiers killing 21 people. Israel’s security personnel and armed civilians have also killed at least 133 Palestinians. The majority was killed during confrontations with security forces and 83 of the casualties are said to be those who committed or attempted to attack Israelis.

Wallstrom called for “a thorough, credible investigation into these deaths in order to clarify and bring about possible accountability.” The UN, U.S. and E.U. expressed concern saying that while they recognize Israel’s right to self-defense, restraint is necessary to ensure the violence does not escalate further.

Palestinian and Israeli human rights groups have often lamented that Israel’s security forces use excessive force against Palestinian attackers even when they have been neutralized but authorities say it was necessary due to the danger that the troops are exposed to in such situations.

The Swedish foreign minister’s statements directed at Israel have always been met with strong reactions following the recognition of Palestine as a state by the Social democrats after they took over power in the 2014 general elections. Last year, she said the violent actions of Palestinians could be justified by the frustration they have been faced with due to Israel’s 48year occupation of their lands.