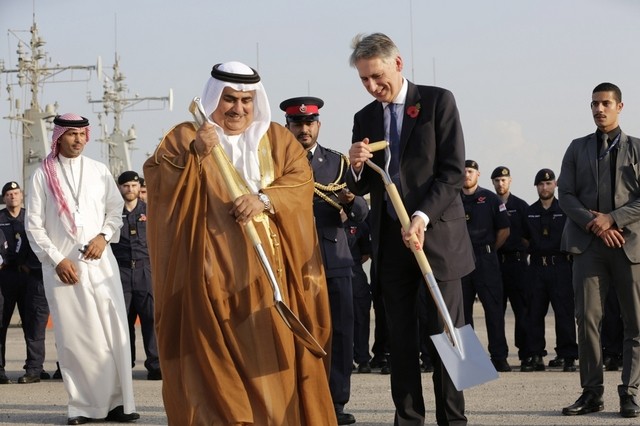 The United Kingdom is building its first military base in the Gulf 44 years after it left the area.

The launch of the construction of a permanent military base in Bahrain was attended by UK Foreign Secretary Philip Hammond and Bahrain’s Foreign Minister Sheikh Khalid bin Ahmed Al Khalifa.

Hammond said the base guarantees the presence of the Navy into the future and “reinforces stability in the Gulf and beyond” with the help of the allies.

Sheikh Khalid welcomed the construction of the base as a “quite important” step “considering the fact that more challenges are happening in the region.” He said the cooperation has been going on for decades and their partnership is geared towards defending navigation in regional waters against “aggression of all sorts” because “it’s our responsibility to keep it open for the whole world.”

Hammond tweeted that the base “is a symbol of UK’s enduring commitment to Gulf security.” He also said during the launch ceremony that “the great challenge of our time” is combatting terrorism.

The agreement to construct the base was reached last year. The base will cost more than £15 million but the largest part of the bill will be paid by Bahrain.

UK has been using the American base in Bahrain as their base in the region but the new base at Mina Salman, Britain’s permanent naval base for the first time since 1967, will serve as “a center for the British military operations in the gulf region and beyond” upon completion and also assure Gulf nations that the international community is committed to their security.

Britain withdrew from bases in the Gulf in 1971, in a move that led to the independence of Bahrain and Qatar and the creation of the United Arab Emirates.