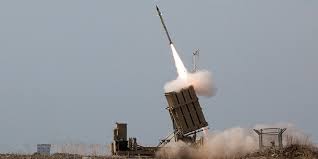 Bahrain’s foreign minister Khalid bin Mohammed al Khalifa revealed on Tuesday that members of the Gulf Cooperation Council (GCC) are planning to buy the Iron Dome anti-missile defense system as a measure against “a growing arsenal of Iranian missiles.”

The nuclear agreement between Tehran and the world powers had led to increased armament in the Gulf.

Reports have stated that talks are in advanced stages and Washington is playing the role of the ‘middle-man’ for the acquisition of the Israeli-developed system which has been able to intercept around 90% of rockets fired from Gaza into the Jewish state.

The Bahraini Minister told British Sky news that “the Israelis have their small Iron Dome. We’ll have a much bigger one in the GCC.” The GCC includes Bahrain, Saudi Arabia, the United Arab Emirates, Oman, Qatar and Kuwait but the minister did not state which members are seeking to acquire it.

The deal is expected to include anti-missile systems that can intercept supersonic intercontinental ballistic missiles.

The systems will be bought through Raytheon and other American contractors who developed the Iron Dome with Israeli arms giant Rafael but a senior Gulf government source stated that “if Netanyahu were not making less of a mess of things and was more like Anwar Sadat, then we would be happy to buy the missiles straight from Israel.”

Bahrain’s foreign minister alleged that “Iran has been trying to undermine and topple governments in our region for years” and also plans to stockpile missiles and develop techniques and tactics to saturate Gulf defense systems in order to defeat them in case of an armed conflict. He fears that lifting the sanctions will further increase Tehran’s capabilities.