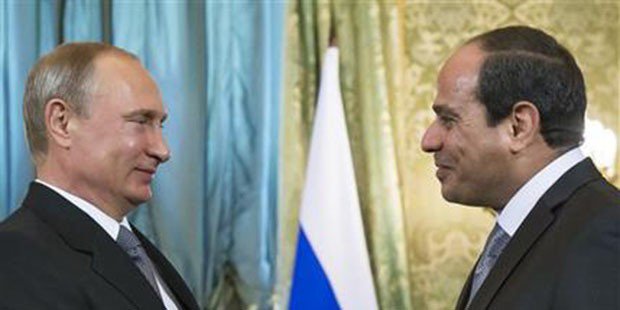 Russian and Egypt agreed on the building of Egypt’s first nuclear power plant in the in Mediterranean city of Dabaa with Russian expertise, the two men said at a joint press conference after their talks.

“One of the biggest bilateral cooperation projects in Egypt is to build a first nuclear power plant based on Russian techniques,” Putin said.

The nuclear power plant with a capability of eight nuclear reactors will be built by the Russian state-owned nuclear company Rosatom.

The two heads of state also agreed that Russia will help establish a free trade zone and an industrial city in Suez Canal corridor, in the Ataqa city. President Putin argued that “Egyptian producers can get benefits from the available capabilities in the markets.”

The joint press conference also served as channel for the two former army-men to announce the creation of wheat storage infrastructure in Egypt. Russia stands as the main wheat exporter to Egypt.

Putin and al-Sissi did not leave out the hot topic of the moment, namely terrorism and the ever growing threat of ISIS in Egypt and elsewhere in the Middle East.

The two presidents said they share common views on the fight against terrorism and president al-Sissi expressed the desire to see Russia joining Egypt’s side in overcoming ISIS that is increasingly becoming of great concern for Egyptian authorities.

“The Egyptian people are hoping for broader ties with Russia in all areas, particularly in fighting terrorism in the Middle East,” al-Sissi said.

Putin insisted that the international community and Arab regional powers should also joined hands in the fight against ISIS.

“(We) have underscored the vital importance of setting a counter-terrorism front to include key international players of the region including Syria,” he said.

This is the third trip to Russia by al-Sissi since he came to power, and the second this year. Russia and Egypt are strengthening their relations as Egypt’s traditional western ally US has become very critical about al-Sissi since the removal of Mohamed Morsi in 2013, particularly regarding the country’s poor human records.