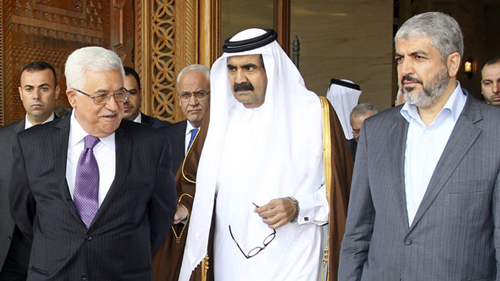 The Palestinian Fatah and Hamas movements have reached a preliminary agreement in Qatar on forming an interim unity government that would be led by Mahmoud Abbas, the president of the Palestinian Authority based in the West Bank.
The agreement was signed by Mr. Abbas head of Fatah and Khaled Meshaal, the political leader of the Palestinian Islamist group.
The accord comes as peace talks with Israel remain in a deadlock while Israel continues to build on occupied lands. And as the revolts of the Arab Spring swept through, Mr. Abbas focused on healing the rift with Hamas and attempting to win UN statehood recognition.
Relations between Hamas and Fatah strained after the Islamist militant group won parliamentary elections in 2006 and, a year later, took full control of Gaza after a brief factional war.
Unity talks between the two rivals movements have failed many times in the past years. Israel and the West say they will not deal with a Palestinian government that includes Hamas unless the Islamic group recognizes Israel, renounces violence and accepts all previous Israeli-Palestinian agreements.