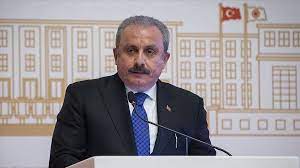 Mustafa Şentop, speaker of the Turkish parliament, Monday charged the West for being “patron of international terrorism”, reports say.
Sentop made the comments while speaking to a panel on Islamophobia in Europe being held in the capital, Ankara, Middle East Monitor (MEMO) reports, citing Anadolu news agency.
“In order to create Islamophobia, it was necessary to present a picture of terrorism by Muslims in the West. This doesn’t occur on its own. Islam doesn’t allow such a thing, anyway. It’s impossible for normal Muslims to do such a thing (terrorism),” he said.
The Turkish state man also claimed that the West invented the model of the “Muslim terrorist” and added that it also supports this model financially and militarily.
“Therefore, the Western world, which invented Islamophobia, is actually the patron of international terrorism,” he said. “We object to the disregard of basic human rights when it comes to Muslims,” he added. Turkey has been a very critical of Europe that it accuses promoting Islamophobia.