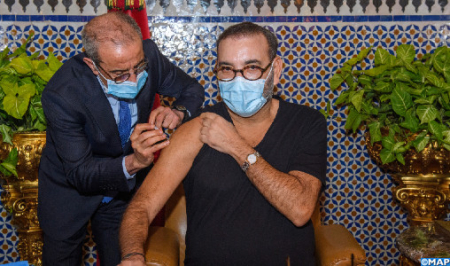 In a nationwide speech made Saturday on the occasion of the Throne Day, King Mohammed VI of Morocco expressed that: “We have every right, today, to celebrate Morocco’s achievements in the ‘battle for vaccines’ – which is far from being an easy one – as well as the successful roll-out of the national vaccination campaign and the citizens’ massive engagement in it.”

King Mohammed VI has also praised the achievements accomplished by the North African country in the global race to secure early vaccines against covid-19 and ensure successful roll-out of the national vaccination campaign against the pandemic.

The king expressed the personal nature of the COVID-19 pandemic, describing the issue as “a difficult situation for all of us, for me and my family, as for all citizens, because I see Moroccans suffering.”

“Indeed, when I see Moroccans suffer, I, too, feel their pain and experience the same feelings,” the king stated in the televised address to the nation.

King Mohammed VI paid particular attention to the current public health crisis, raising the issue as the first of several items in his speech. The king extended his thanks to “the entire staff working in the health sector – in the public, private and military sectors – and to the security forces and public authorities.”

These front-line workers, he stated, have shown “dedication and keen spirit of responsibility“ in their response to the pandemic.