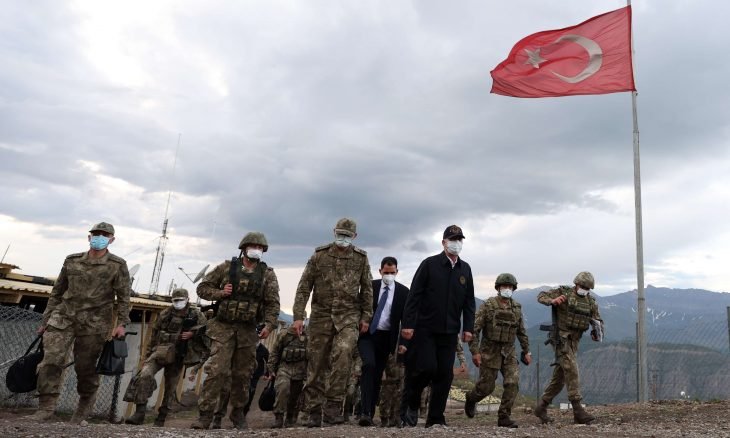 The Iraqi foreign ministry Monday summoned the Chargé d’Affaires to the Turkish embassy in Baghdad, to protest against a visit by Turkish Defense Minister Hulusi Akar to a military base in northern Iraq, Alquds newspaper reports.
The ministry in a statement said the Turkish diplomat was handed a protest letter regarding the visit.
The Iraqi government “expressed its strong resentment and condemnation of the Turkish Defense Minister Hulusi’s presence inside the Iraqi territories without coordination or prior approval by the competent authorities, and his meeting with Turkish forces present in the territories illegally,” the ministry stressed.
The statement also noted that “continuing with such an approach is inconsistent with friendly relations, good neighborliness, and international laws and norms”. Akar, Chief of Staff Yasar Guler, and Commander of the Land Forces, Umit Dundar recently visited a Turkish military in Iraq for an inspection.
Turkey uses bases in mountainous Northern Iraq near the border between the two countries to wage war on fighters from Kurdistan Workers Organization, blacklisted by Ankara and several western countries as terror group.