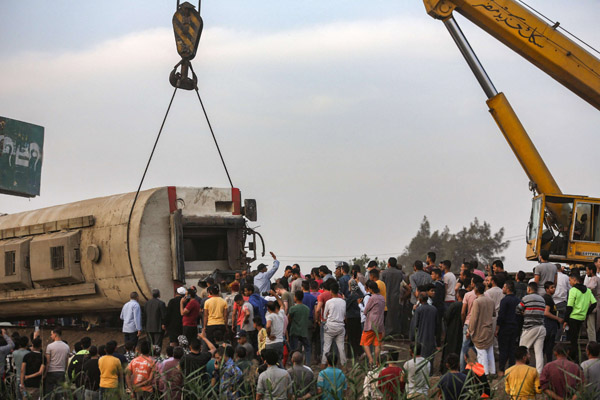 As many as 23 people have been arrested in Egypt on charges of negligence and failure to observe laws and regulations while performing their jobs in connection with investigation into a train crash on Sunday that killed 23 people, Arab News reports.
The defendants include the director of the railway engineering department in the area of the accident, another engineer, train conductor, his assistant, the supervisor of the railway maintenance in the area where the accident occurred, the general director of track renovations, the general director of maintenance, mechanical engineers, and a group of workers and technicians specialized in the maintenance of train vehicles.
Their arrest came following an order from public prosecutor Hamada Al-Sawy who is leading the investigation into the tragedy that also caused injuries to 139 people.
The probe identified negligence in the maintenance of the trains, as well as forgery in official documents, following the interrogation of 29 Egyptian Railway Authority officials and after hearing the testimony of 104 of those injured in the accident.
A passenger train bound for Mansoura, left the capital Cairo at 1:20 p.m but crashed in the town of Toukh.
The Sunday tragedy was the third in a month.