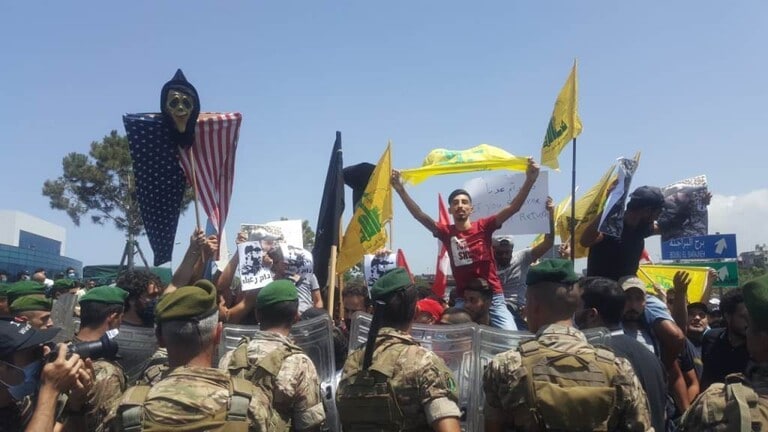 Hundreds of Hezbollah supporters demonstrated Wednesday in capital Beirut to denounce the visit a top US military commander, The New Arab reports.
The protestors occupied the road to leading to Beirut international airport as the US Central Command chief Kenneth F McKenzie arrived in Lebanese capital for a one-day visit.
The trip according to the demonstrators, is to mark the anniversary of a 1983 bombing that killed 241 US military personnel in Beirut.
“Today we are standing here to tell the Americans that the honored operation that took place on 23 October 1983 is an honor for us,” one protestor named Hasan Illaik, a journalist at the daily Al-Akhbar newspaper, said.
“It is one of the operations (attacks) that prevented Lebanon to be part of the American and Israeli project in the region,” he added.
Last month, the US official reportedly suggested that the U.S must maintain a close relationship with the Lebanese armed forces in order to counterbalance Hezbollah’s influence.
“I believe that they offer the best opportunity to provide security and sovereignty for Lebanon,” McKenzie said in a webinar as he campaigned against US plan to cut funding to the Lebanese army.
Tensions have emerged recently between the U.S and Hezbollah after the American ambassador to Lebanon Dorothy Shea accused the Shia powerful of stealing billions from state coffers during the economic crisis. Hezbollah leader Hassan Nasrallah called the American diplomat a “military ruler” who was inciting tensions, The New Arab reports.
McKenzie, as part of the visit, according to the US embassy, met with President Michel Aoun at Baabda Palace on Wednesday, where he “reaffirmed the importance of preserving Lebanon’s security, stability, and sovereignty, and underscored the importance of the strong partnership between the United States and the Lebanese Armed Forces”.
The American official was scheduled to encounter senior Lebanese political and defense leaders, including representatives of the Ministry of Defense and the Lebanese Armed Forces.