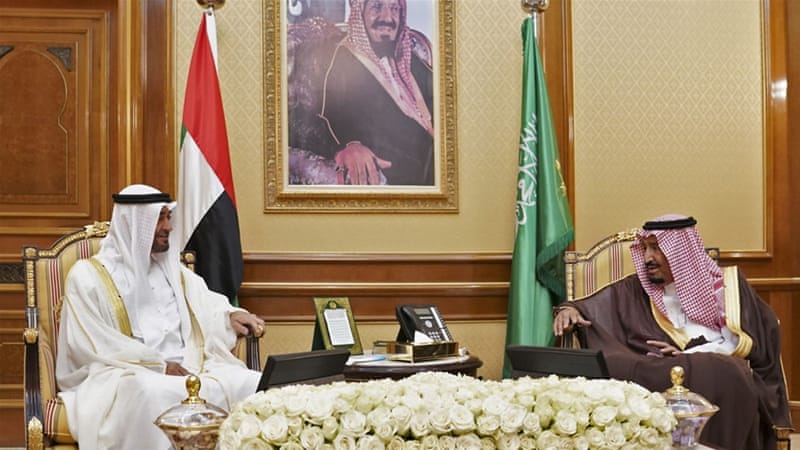 Saudi Arabia and its ally UAE this week papered a diplomatic tension, as they tried to dismiss their first disagreement in the Saudi-led campaign in Yemen.

Speaking after the meetings, Sheikh Mohamed said dialogue is “the only way to resolve differences between Yemenis”.

Saudi Arabia, which is leading an international coalition in Yemen since 2015 seeking to combat Iran-backed Houthi rebels, has fussed about the seizure of the Southern city of Aden by UAE-backed Southern Transitional Council (STC) from the Riyadh-backed and internationally recognized Yemeni Government of President Abd-Rabbu Mansour Hadi.

The four days of fighting between the two sides killed more than 70 people, according to press reports.

The STC is seeking to break away from the South in a move that further complicates the unification of the poorest Middle East country.

Saudi Arabia on Sunday reportedly conducted an airstrike against a separatist position in Aden as it pressed the UAE-backed side to withdraw from the city.

The seizure of Aden is the first major rift between Saudi Arabia and its closest regional ally in Yemen. After the Monday meeting, the two countries called for talks between their respective factions.

Sheikh Mohammed bin Zayed affirmed that the UAE and Saudi Arabia call on conflicting Yemeni parties to prioritize dialogue and reason for the interest of Yemen and its people, the UAE state-run news agency WAM reported.

While the head of the STC said he was ready to take part in the Saudi-brokered peace talks, Hadi’s government has ruled out talks with the STC unless they withdraw from the port city.

Anyways, the latest deadly fighting in Aden has dealt a blow to the Saudi-UAE alliance and further complicated Yemen’s devastating conflict, which has killed tens of thousands of people and contributed to what the UN calls the world’s worst humanitarian crisis.