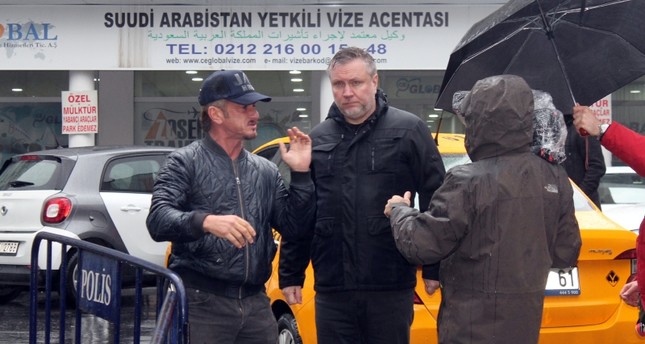 US renowned Hollywood actor, director and two-times Oscar winner Sean Penn has arrived in Istanbul, Turkey, to shot a documentary about Saudi journalist, Jamal Khashoggi who was murdered and dismembered in the Saudi  consulate on Oct.02, Turkish media Daily Sabah reports.

Khashoggi, 59, critic of Saudi Crown Prince Mohamed bin Salman (MbS) and US Washington Post writer, was killed after entering the consulate to get official documents that would have allowed him to marry his Turkish fiancée, Hatice Cengiz.

According to Sabah daily, the US director is also expected to interview Hatice Cengiz and a handful people connected to the slain journalist.

The American director and political and humanitarian activist is also set to meet with Turkish authorities in Ankara and Istanbul.

Turkey pointed the blaming finger at the Saudi highest level leadership for the journalist’s death.

Wednesday, leaders of the US senate pinned the blame on MbS for the journalist’s killing after they were briefed by the CIA on the case.

Saudi Arabia has admitted that the journalist had been murdered but denied any involvement of the Crown Prince.

The documentary project has reportedly caused a stir in Saudi Arabia, and the media aligned with the royal court tried to vilify and tarnish the image of the American activist.

Al-Arabiya described Penn as linked to “causes affiliated to the Muslim Brotherhood” because of his stance in support of Argentina, “not England” over the Falkland Islands issue.

“He was also linked to Iran as he played a role in the release of two Americans who were imprisoned in Iran, in 2011,” Al-Arabiya wrote in the article.