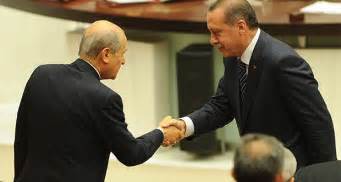 Turkey’s President Recep Tayyip Erdogan held Wednesday talks with leader of the opposition Nationalist Movement Party (MHP) to tie an alliance for 2019 elections in hope for his re-election at the head of the country.

Erdogan’s meeting with Devlet Bahceli focused on their alli-ance, which, according to the media, was suggested in the wake of the botched July 2016 military coup.

According to media reports, leaders of Erdogan’s Justice and Development Party (AK Party) and those of MHP suggested the establishment of a working group to work out the alliance model and institutionalize the merger.
Bahceli on Monday told reporters in Ankara that his party will not field a candidate for 2019 but will instead support Er-dogan’s re-election, Daily Sabah reports.

The AKP leader won presidential election in 2014 to become the country’s first elected president after changing the consti-tution.

The amendments, which alter the country’s governmental sys-tem to an executive presidential system, will take effect with the presidential election of November 2019.

With the new system, parties need to build alliances to reach the required 50+1 percent of votes needed for their presiden-tial candidate to be elected.