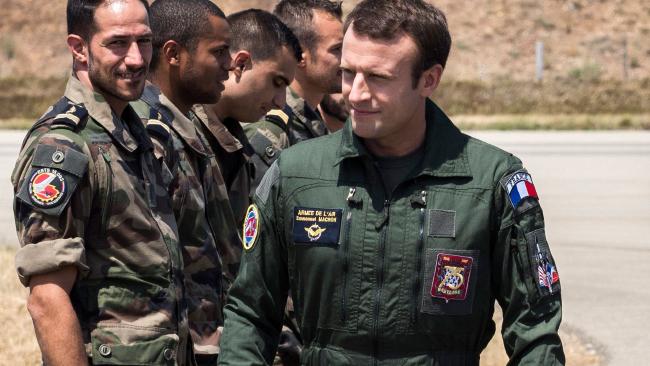 French President Emmanuel Macron Wednesday laid into the White House, Riyadh and Tel Aviv for their rhetoric on the going-protests in the Islamic Republic as he argued that their stances could craft a path to war, reports say.

“The official line pursued by the United States, Israel and Saudi Arabia, who are our allies in many ways, is almost one that would lead us to war,” the French leader told reporters.

The line being taken was “a deliberate strategy for some,” he said.

The Islamic Republic has been facing for a week regime change demonstrations which started December 28 against economic hardship.

At least 21 people have died since the start of riots while hundreds have been arrested. Iranian authorities have blamed enemies of the Islamic Republic for fomenting the uprising, the biggest since 2009.

President Trump openly has endorsed through daily series of Tweets the demonstrations.

“You will see great support from the United States at the appropriate time!” wrote in one Tweet.

Tuesday the US envoy to the UN Nikki Haley indicated the US would seek a UN emergency session on the situation in Iran.

The Trump administration has made Iran its top enemy in the Middle East and refused to stamp the Islamic Republic’s compliance with the nuclear agreement signed with world powers in 2015.

“Brave Iranians are pouring into the streets,” he said.

“They seek freedom. They seek justice. They seek the basic liberties that have been denied to them for decades.”

European countries have been cautious in their comments on the crisis in Iran. Berlin called for dialogue in answering the grievances expressed by the demonstrators. It also urged Teheran to “respect freedom of assembly and expression.”

Macron in a telephone conversation with his Iranian counterpart Hassan Rouhani called for ‘restraint’, reports.

Unlike the US, the EU has sanctioned Iran’s compliance with nuclear accord and several countries of the block including France have started warming ties with Tehran.

Head of Revolutionary Guards General Mohammad Ali Jafari Wednesday announced the “end of the sedition”. He noted that “a large number of troublemakers have arrested and will be dealt with”.

Thousands supporters of regime and the Islamic revolution Thursday poured in the streets of several cities including Isfahan, Ardebil and Mashhad, which were the epicenters of the protests. They also held protests on Wednesday.

The parliament has called on President Hassan Rouhani to provide answers to protesters economic demands.

“As concerns petrol prices, we must absolutely take into account the situation of the people because the tensions are absolutely not in the interests of the country,” parliament speaker Ali Larijani said on Wednesday.