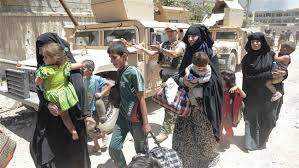 The United Nations Regional Humanitarian Coordinator for the Syria Crisis last week issued a warning as to the high numbers of deaths and injuries among Syrians pointing out that September was the deadliest month of the year as hospitals, ambulances, schools and displaced people escaping violence are being routinely targeted by airstrikes in Syria.

“I am appalled by reports of high numbers of civilian casualties due to heavy air attacks in Syria,” said Panos Moumtzis, the Regional Humanitarian Coordinator for the Syria Crisis.

“September was the deadliest month of 2017 for civilians with daily reports of attacks on residential areas resulting in hundreds of conflict-related deaths and injuries,” he added in a news release issued by the UN Office for the Coordination of Humanitarian Affairs (OCHA).

Last week, airstrikes on Raqqa City killed dozens of people and injured many others while some 8,000 others remain trapped there.

Between 19-30 September, airstrikes on residential areas in Idlib killed at least 149 people – the majority of whom were women and children.

Relatedly, AFP reported Monday that the civilians who are trapped in Raqqa are used as human shields by ISIL.
“As ISIL fighters retreat into a shrinking part of Syria’s Raqqa, they are dragging along terrified civilians for cover against a ferocious US-backed onslaught,” AFP stated, adding that “locals who managed to flee describe being herded into apartments in buildings used by jihadists as makeshift military bases, and serving as human shields for fighters as they collect water.”

In late September, the coalition acknowledged the deaths of 735 civilians in its strikes on Syria and Iraq since 2014, but the Britain-based Syrian Observatory for Human Rights says hundreds have been killed in Raqqa alone since June.
Meanwhile, the United Nations refugee agency has warned that dwindling resources could severely jeopardize efforts to provide refugees and displaced persons across the Middle East with essential winter supplies such as thermal blankets and warm clothing.

For many, it will be the seventh consecutive winter in displacement, living in tents or in makeshift settlements in near-freezing temperatures.

“We estimate that as many as four million are at extreme risk and need timely and substantial help to properly prepare for the forthcoming winter [and] of these only one in four are likely to get the assistance they need,” said Andrej Mahecic, a spokesperson for the Office of the UN High Commissioner for Refugees (UNHCR).

He called for greater funding for the agency’s response plan to ensure help is provided to all in desperate need.

According to estimates, there are nearly 15 million Syrian and Iraqi refugees and internally displaced persons across the region, in Turkey, Lebanon, Jordan, Egypt, Syria and Iraq.