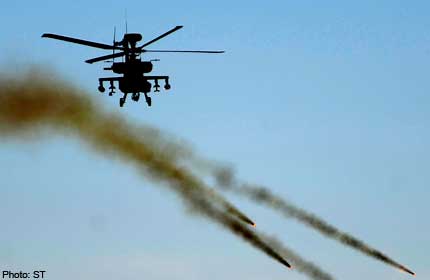 A convoy of vehicles laden with weapons, ammunition and explosives was destroyed by Egyptian authorities as it was attempting to cross into the country from the western borders with Libya, at a time Egypt has tightened security at its borders to keep militants and armed smugglers at bay.

Army sources relayed by media revealed Sunday that 15 four-wheel drive vehicles loaded with weapons, ammunitions and explosives were spotted trying to cross into Egypt from the western border with Libya.

The vehicles were destroyed in air raids in the western desert.

The operation took place based on intelligence reports that criminal elements were trying to cross into Egypt from its western border, army spokesperson Colonel Tamer Al-Refaei said in a statement.

Egypt is struggling at its border with lawless Libya where criminals and terrorists are roaming about as the country still suffers from the 2011 revolution, which brought down strongman Muammar Gaddafi.

The Egyptian army last month launched a similar operation after it identified vehicles reportedly laden with weapons, ammunitions and explosives sneaking into the country from Libya.