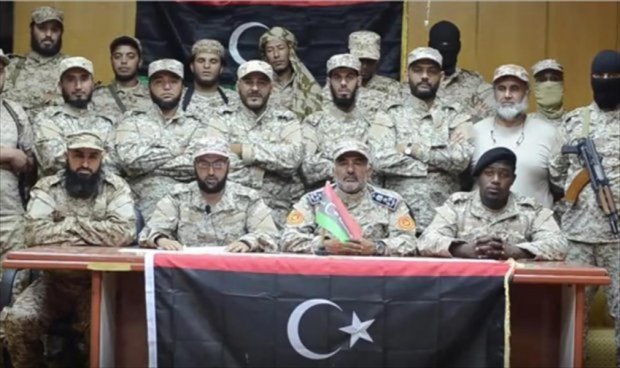 The Libyan armed group Benghazi Defence Brigades (BDB), opposed to Eastern-based Field Marshal Khalifa Haftar, has accused the United Arab Emirates (UAE) of halting peace among Libyans and pointed at its covert plans to dominate the North African country through its ally Haftar.

The BDB has been placed on the blacklist of terror groups issued Thursday by Saudi Arabia, UAE, Bahrain and Egypt. Five other Libyans have been also named on the list.

The group, which opposes Haftar’s expanding influence in Libya, pointed out, in a statement, that the UAE “was trying to disrupt the 17 February Revolution”.

The BDB explained the UAE’s influence in Libya through its support for Haftar and establishment of a military base in Cyrenaica.

The UAE has openly expressed its support for Haftar who made several trips to Abu Dhabi. It has supplied the Marshal with military equipment despite the UN arm embargo imposed on the North African country since 2011.

Helicopters, including a Russia-made Mi-24 Hind gunship, and a single-engine light attack plane have been based in eastern Libya after being transferred from the UAE to the Libyan National Army (LNA) led by Haftar, MEE reports.

Over 90 armored personnel carriers and more than 500 other vehicles were delivered to the LNA in the eastern city of Tobruk in April 2016, MEE further notes citing the report.

A US-made warship; AT-802i made by Texas-based Air Tractor Inc, initially sold to UAE has been found with LNA.

Russia has also been accused of equipping Haftar who is reportedly eyeing top political role in Libya.