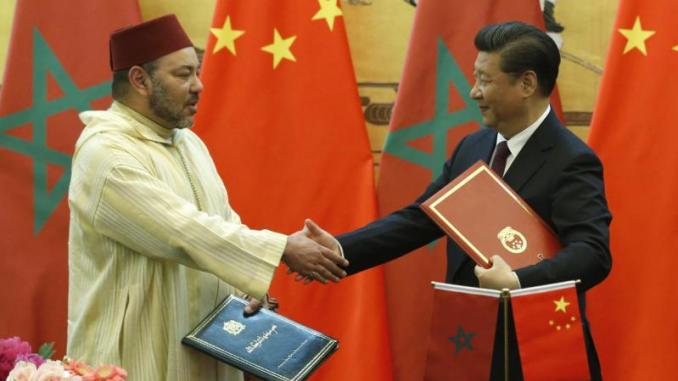 King Mohammed VI chaired Monday at the Marchane Royal Palace in Tangiers a ceremony on the new industrial city to be built in the Northern city of Tangiers in partnership with Chinese group HAITE.

Several accords related to the project dubbed “Mohammed VI Tangiers Tech City” were also signed on this occasion. This new city will boost economic activities in Tangiers and the entire northern region and is the fruit of the royal vision to diversify Morocco’s economic partnerships.

The total investment of companies is expected to reach $10 billion over 10 years.

The Mohammed VI Tangier Tech City will be built over 2,000 hectares in its first stage for $1 billion. It will be a new international smart city where industry and innovation respect ecology requirements.

This project shows that Morocco continues to attract foreign investors and gain their trust thanks to the incentives granted to businessmen, the country’s proximity to Europe, its low labor costs and political stability.

Moroccan aeronautic industry is growing rapidly and becoming more and more competitive. Unlike some other countries in the region, Morocco has managed to avoid a big drop in foreign investments since the global financial crisis and the Arab Spring uprisings of 2011, partly by marketing itself as an export base for Europe, the Middle East and Africa.

It has attracted some big aeronautics investors in recent years, including giant manufacturers Boeing, Bombardier, Eaton Corp… The aeronautic industry in Morocco, which employs 11,500 people and achieved last year exports worth $1bn, has been growing at 15 per cent a year.

The aim is to reach 23,000 jobs by 2020, increase exports to $1.6bn per year and increase to 35 per cent the proportion of locally-produced or assembled components.