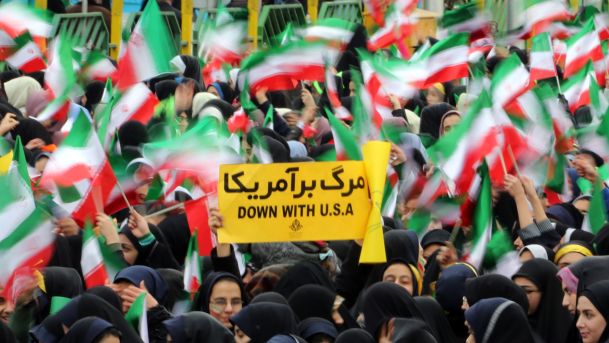 Thousands of Iranians assembled at the building that used to be the US Embassy in Tehran to celebrate the 37th anniversary of the militant students storming of the building and taking 52 Americans hostage for 444 days following Washington’s rejection of handing over toppled Shah, Mohammad Reza Pahlavi, for trial in Iran.

This year’s 4 November celebrations coincide with what Commander Hossein Salami of the Islamic Revolutionary Guard Corps said is the dwindling of American influence in the world especially in Muslim counties.

Iran’s supreme leader, Ayatollah Ali Khamenei in his speech as part of the celebrations said Shah Pahlavi and the government during his reign were “a puppet to American policies” and accused the US of being “a tyrant who had imposed dictatorship” as he described the period of around 25 years as “very dark ages for Iran.” He also stated that the nuclear agreement reached with the permanent members of the UN Security Council plus Germany is being set aback by the US as he claimed that “negotiations with the US will not resolve our problems” because it is an unreliable partner and it is currently “a crisis-hit country.”

Since the 1979 incident and the ending of the hostage crisis, the two countries severed their diplomatic ties and their interests are represented by Switzerland respectively. Tensions between the two nations remain strained and recent incidents in the Persian Gulf have only boosted it.